My research has been pretty Berlin-specific lately, so I was thrilled to find a relatively new video uploaded to You Tube. When the Allies Settled in Berlin (1945) is one of the most high quality pieces of footage I’ve ever seen of the period. And since it’s in color, allied Berlin is truly brought to life. This is footage without commentary. It’s mostly slice of life imagery.

So if you want to see Russian troops, men and women, marching down a wide street (smiling!), or British troops swimming at the Olympia Stadium, or German women joking around with the cameraman while they clean up the ruins, give this 12-minute film a look.

One of my favorite parts of this video are the images of the different armies/troops getting along in close proximity. No Cold War yet….

And if you know German, or just want to see the footage and narrative from the German side, try the long documentary Berlin unter den Allierten (1945-1949).

It’s 1945 and soldiers in the US Army are about to shake hands with their Russian counterparts for the first time in Nazi Germany, the land they defeated together. The average GI didn’t know much about the Soviets except for the news/propaganda they’d consumed before and during the war. So how did the War Department deal with what was to be a meeting of WW2’s biggest allies?

Imagine all those GIs holding War Department Pamphlet No. 21-30 with its red cover and the hammer and sickle: our Red Army ally. It’s a 77-page illustrated booklet giving the GI the lowdown about Soviet army practices, uniforms and insignia, weaponry, language and other interesting tidbits. It’s not terribly easy to find information in English about regular Soviet soldiers and their everyday lives, so this booklet is a real find.

The Cold War was pretty much over when I was growing up in the United States, but I do remember the Soviet Union being accused of being a part of some vague axis of evil. That’s why I was so struck by how positive our Red Army ally was about the Soviets. I don’t think I’ve ever read or seen a US government source that attempted to be so fair and understanding about them.

On the first page under “Meet the Red Army Man,” it says:

Elsewhere, the GI learns that Red Army discipline is strict, that soldiers make do with much less than what GIs have, and that off duty Soviets play dominoes and chess or read Pushkin. This lesson in humanizing the Soviets continues under the section “Why He Fights,” where the booklet argues Soviet soldiers are just the same as American ones. They want to live a peaceful life in their homelands, but in the Soviet case, they had to mobilize to defeat the brutal enemy that killed millions in the Soviet Union. The Red Army’s oath is even printed so the GI understands what ideal his counterpart aspires to.

My favorite section was on p. 6 when GIs are informed about Soviet women in combat. I was surprised women got a whole paragraph describing their work and the fact that some became commanders of combat formations.

Don’t be surprised if that tank commander turns out to be a personable young sergeant named ‘Masha’ (a popular nickname for girls).

Though apparently some of the language advice in the booklet is a bit shaky, the information as a whole is golden, especially the many color illustrations. I was also impressed at the little glimpses the booklet gave into everyday life of Soviet soldiers. But most impressive was seeing the massive attitude shift in the US government ahead of the monumental task of occupying the defeated Nazi Germany with its militarily strongest ally — and its biggest threat — the Soviet Union.

Does anyone have any idea where this photo was taken?

The man in the photo is the father of one of my American readers. He’s in front of a Military Government building, but she’s not sure where in Germany it was. Here’s the general information she was able to give me:

“My dad was an army surgeon with the 27th evacuation hospital.

In Germany they served at Dreisen, Hosbach, Feuchtwangen, Starnberg and
Darmstadt. They treated victims from all countries and were among the first
to help the victims at Dachau.
I’m assuming this is from 1945.”

If you recognize the building in this photo, please contact me. Thanks!

It’s natural to feel dismay at scenes of devastation, but what about hope? Cologne was about 75% destroyed in WW2, yet it’s still here, still wearing silly costumes at Karnival time, and telling really bad jokes to bad music. The amazing Cologne Dom still pierces the clouds. As bad as the world’s conflicts are, there’s always hope — to rebuild, and go on living.

Here was Cologne on April 24, 1945, view taken by the US Department of Defense (now public domain). 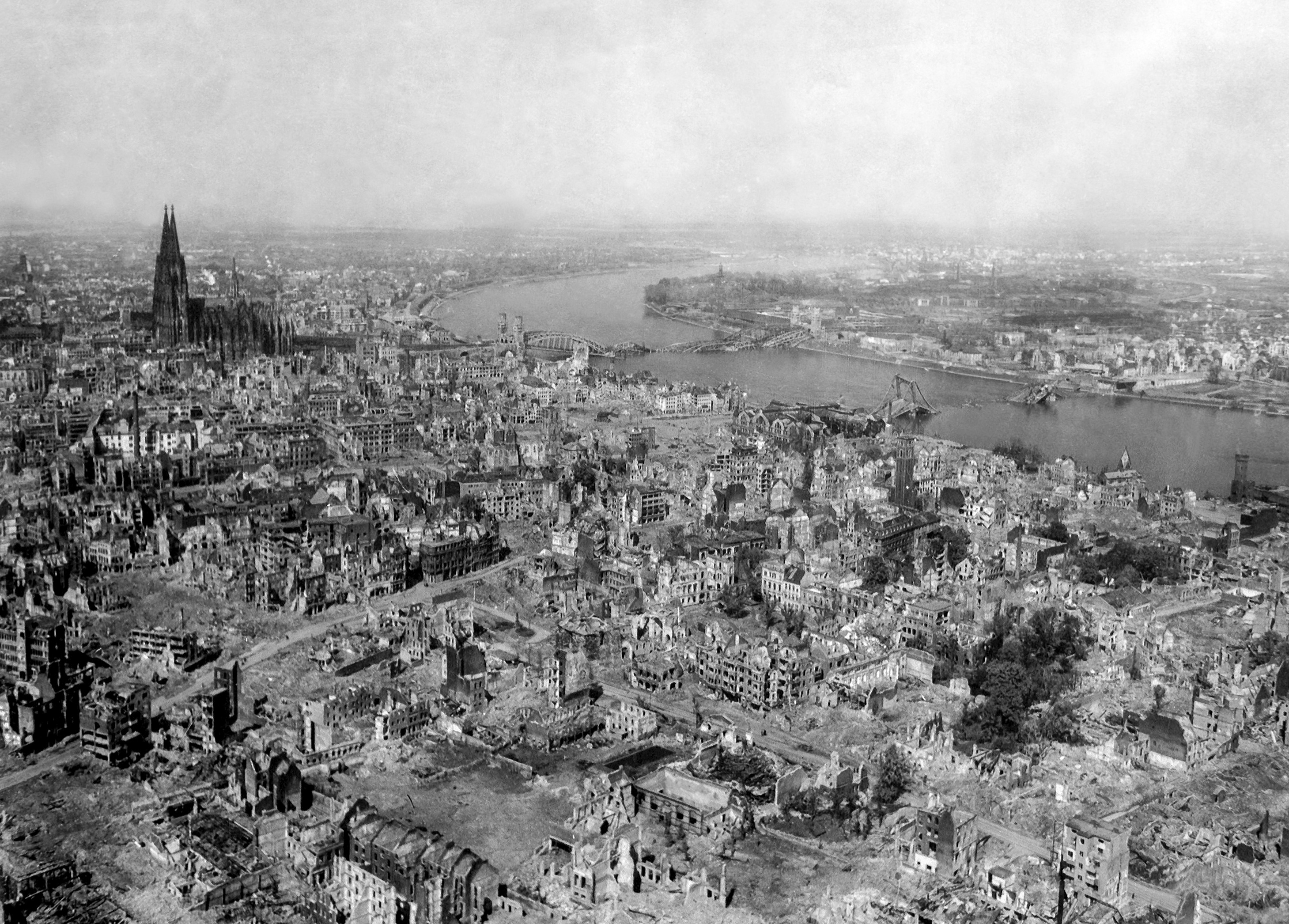 Today I was happy to see Der Spiegel’s English version of its beautiful multimedia series on the fate of select German and non-German cities at the end of World War 2. You can hear the original interviewees with English subtitles while rare period footage roles in the background. There are photos, maps, stats and wartime video.