The true tragedy of the bombing war in World War II was measured in human lives. The numbers can vary, but here’s an idea of the devastation bombardments brought to the Axis Powers. (I think 70 years after the war, we can admit the bombs were awful for common people without getting into an argument about who deserved what).

The end of the war meant the end of bombs, but it would be years before reconstruction in Germany made a dent in the damage. In Essen, the city I live in,  the Allies targeted anything within range of the Krupp Steel Works. Ninety percent of the city center was destroyed or severely damaged.

90%. I can imagine my hometown in Michigan, the main drag where all the shops and restaurants are clustered — in ruins. 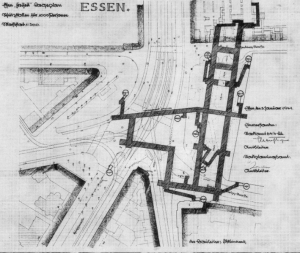 But back to Essen. Hard to believe, but thousands of people lived under those ruins. For years. Not just in cellars of collapsed or shaky buildings. Many lived in a tunnel system near the main train station. Some if not all the tunnels were from old coal mines — some hundreds of years old and lost to memory — that still snake under the city. Not long ago, the authorities closed down a part of the Autobahn near here because of one of these lost tunnels. They’re everywhere.

In one of my next posts, I’ll describe how people lived down in the dark.