I’ve kept this blog #USElection2016 -free, but today I have to say something.

Donald Trump is not Hitler, of course, and Hillary Clinton is no saint.

A lot of us Americans are asking ourselves what happened to our country. How could tens of millions of our people be galvanized by a man who claims he can fix the country for us? Who talks populism, protectionism, division, ridicule and hate? We can’t wrap our minds around the fact that so many of our neighbors and family members could see a leader in a man who spits venom.

Now imagine it’s 1945 or ’46. What were the Allies asking themselves in occupied Germany? 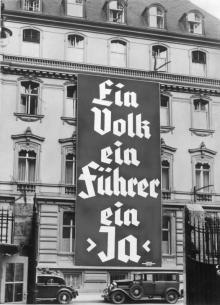 How could these people fall for that man? Was there something special about the Germans that made them blind to what he was? Did they see and not care? Were they concerned citizens voting according to their economic interests? Was it a vote against the Weimar establishment? Were they rebels? Were they sheep? Were they evil?

Those were real questions back then and all through the rest of the 20th century.

Now we know the answer to the biggest question.

It can happen anywhere. We saw it in Britain, we saw it last night in the USA. One of the first thing my international friends speculated about this morning was whether Germany would be next. There’s a national election here next year. Will lightening strike twice in this country where we’ve made our homes? If so, what do we tell our children about democracy and leadership and the rights of citizens? What do people who care about freedom do in an age when authoritarianism and the politics of division seem to be rising up all around us?

I don’t know. I’m too tired to think about it right now.

I do know that the Germans of the war generation were criticized for not resisting. For not seeing who and what was in front of them. Some were electrified by the new order. They were going to make Germany great again. Many people accepted the ugly side of the situation, or they succumbed to fear, they blended into the woodwork and got on with their lives, they became opportunists benefiting from the new laws, or they gave up on politics altogether. They let the wrong people trample over their country, its minorities and the weakest of its citizens. The ultimate result was total collapse.

We can tell ourselves that’ll never happen to us. Not in 21st century America. Except the people back then also thought they were making their country and the world better. Aside from being racist and antisemitic, the Nazis hated intellectuals, the media, artists, the disabled, gays, political “dissidents,” women in power, and anyone who ridiculed or criticized them. That looks a whole lot like what we’re seeing in the US and other democracies right now. How does that make the country and the world better?

It’s not the world I want my kids growing up in. But since it looks like they have to, all I can do is teach them a lot of critical thinking, a little history, and a skepticism of anyone who claims to be their leader. That’s not what democracy and freedom are all about.

4 thoughts on “That’s how it happens, folks”