Polls are a snapshot of what people are thinking at any given time. We’ve drifted toward seeing polls as somehow predictive of how people will act, one reason polling in general has taken a hit since Brexit and Trump’s election.

But polling has been around a long time as a way to get inside the minds of groups of people. That info can be used to form policy or see the effects of policy. That’s why the US military government did a range of polling in the US zone after World War II. Batteries of questions asked Germans about their daily lives, family, work, their opinions about the allies and Germany’s occupation, and particular policies such as the dismantlement of German factories as war reparations.

If you want to read a full report of the polling, check out Public Opinion in Occupied Germany, The OMGUS Surveys from the University of Illinois Press, 1970.

One issue the Americans looked at was antisemitism.

In December 1946, the military government polled 3006 Germans in the US Zone of Germany and the US sector of Berlin. The questions floated around one main issue – What did the years of antisemitic Nazi propaganda leave in the minds of the Germans?

In general, the poll found that people with stronger antisemitic opinions tended to be less educated, from a lower socioeconomic class and less informed. They also tended to be more critical of the Allies, and thought National Socialism was basically a good idea.

In other words, the numbers looked pretty awful.

Women expressed stronger antisemitic opinions than men – 67% of the women versus 50% of the men.

An interesting question measured whether a person recognized that the Germans had tortured and murdered millions of innocent Europeans. 72% of people with few prejudices agreed with this, while only 41% of the racist/antisemitic people did.

Which goes to show you that there has always been a significant percentage of people who choose to believe what they want, against all evidence.

After a lot of talking with friends and family about what’s going on in the USA, it’s pretty clear to me what I’m most concerned about. It’s the echoes of authoritarian regimes. Just echoes for now. But when power is concentrated into the hands of a single party, it’s up to people concerned with freedom to stand up and look at what the dangers are. Postwar Germany took a long, hard road analyzing its authoritarian past and trying to build safeguards so it never happens again. But first, it had to recognize the problem.

Last night, I did up a little graphic laying out some of the basic techniques of authoritarian regimes — right or left. This isn’t about one political ideology or another, it’s about concentrated power, how it’s taken and what is done with it. Nazi Germany did this right along with the Soviet Union. Modern Russia, Turkey and other countries did many of these things, or are in the process of doing them. I left a lot off the list for space reasons. What do you think should be added?

It’s up to us to recognize the similarities and be sure things don’t get out of hand. 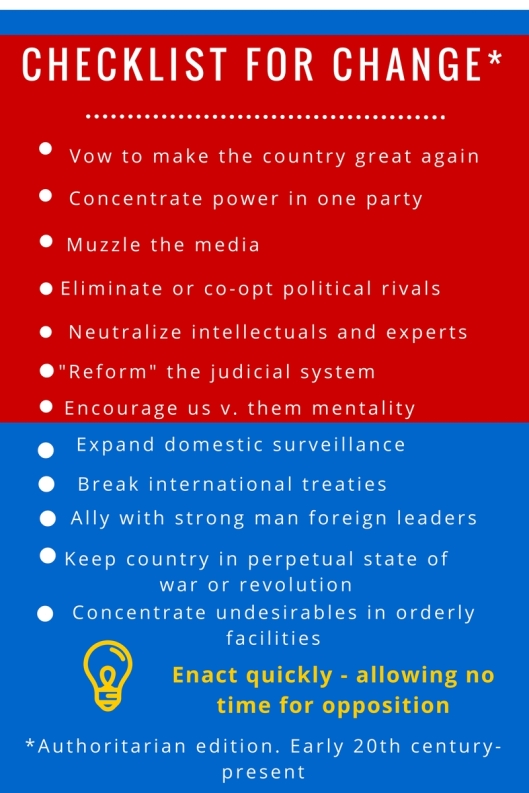 I’ve kept this blog #USElection2016 -free, but today I have to say something.

Donald Trump is not Hitler, of course, and Hillary Clinton is no saint.

A lot of us Americans are asking ourselves what happened to our country. How could tens of millions of our people be galvanized by a man who claims he can fix the country for us? Who talks populism, protectionism, division, ridicule and hate? We can’t wrap our minds around the fact that so many of our neighbors and family members could see a leader in a man who spits venom.

Now imagine it’s 1945 or ’46. What were the Allies asking themselves in occupied Germany?

How could these people fall for that man? Was there something special about the Germans that made them blind to what he was? Did they see and not care? Were they concerned citizens voting according to their economic interests? Was it a vote against the Weimar establishment? Were they rebels? Were they sheep? Were they evil?

Those were real questions back then and all through the rest of the 20th century.

Now we know the answer to the biggest question.

It can happen anywhere. We saw it in Britain, we saw it last night in the USA. One of the first thing my international friends speculated about this morning was whether Germany would be next. There’s a national election here next year. Will lightening strike twice in this country where we’ve made our homes? If so, what do we tell our children about democracy and leadership and the rights of citizens? What do people who care about freedom do in an age when authoritarianism and the politics of division seem to be rising up all around us?

I don’t know. I’m too tired to think about it right now.

I do know that the Germans of the war generation were criticized for not resisting. For not seeing who and what was in front of them. Some were electrified by the new order. They were going to make Germany great again. Many people accepted the ugly side of the situation, or they succumbed to fear, they blended into the woodwork and got on with their lives, they became opportunists benefiting from the new laws, or they gave up on politics altogether. They let the wrong people trample over their country, its minorities and the weakest of its citizens. The ultimate result was total collapse.

We can tell ourselves that’ll never happen to us. Not in 21st century America. Except the people back then also thought they were making their country and the world better. Aside from being racist and antisemitic, the Nazis hated intellectuals, the media, artists, the disabled, gays, political “dissidents,” women in power, and anyone who ridiculed or criticized them. That looks a whole lot like what we’re seeing in the US and other democracies right now. How does that make the country and the world better?

It’s not the world I want my kids growing up in. But since it looks like they have to, all I can do is teach them a lot of critical thinking, a little history, and a skepticism of anyone who claims to be their leader. That’s not what democracy and freedom are all about. 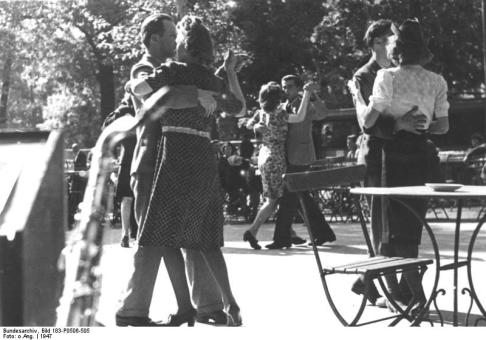 I’ve written before about how changed German women were after the war. But what happened to the relationships between wives and their husbands?

Annegrete Baum’s Frauenalltag und Empanzipation talks about the hard realities German husbands faced when they came home after 1945. On paper, nothing had changed. Marriage was still regulated by laws drawn up in 1900. A husband controlled his wife’s money and whether she could work outside the home. He dictated her roll with their children. He had the right to decide where the family would live, what furniture and appliances the home might have, and when meals would be served.

The war changed all that. The problem was, many men, exhausted and demoralized from the war, couldn’t or wouldn’t accept that anything had changed. After all he’d sacrificed, he could be lord of his house again, couldn’t he? But a husband who tried to reestablish his dominant role sometimes got this reaction from his wife, as one woman wrote in 1948:

With letters from women, the screenwriter and moderator Walther von Hollander tried to understand why rates of divorce shot up in Germany after the war. The core reason was how well women took on responsibilities that used to be reserved for men. That translated into control over their money and, as an extension, a new sexual freedom. And these changes were happening on a home front where the women fought to survive the bombardments and invasion. Women saw themselves as soldiers as much as their men. Husbands had no right to claim special privileges when they got home.

Hollander also had to admit part of the problem was simple. The men had lost the war.

But as a wise female physician observed, they returned not infrequently with the look of winners. “Women,” the physician said, “entrusted their lives to the men, and even trustingly followed them into the war, which they rejected internally. The women knew a long time ago that the war was lost. But the men assured them that they would still win it. Now, after the defeat, they cannot demand that we continue to entrust ourselves to their leadership.

What about couples who stayed together? A 1948 episode of the radio show “Guten Morgen, liebe Hausfrau” offered advice for a good postwar marriage.

Men live on illusions! To let him have them — that’s the secret of a cleverly conducted marriage. Why take away his illusion that he’s the lord of the house?(2)

I’ve always considered Spandau Prison a bit like something in “news of the weird.”

On July 18, 1947, the seven top German war criminals to survive World War 2 moved into their new prison in the Spandau district in Berlin. Rudolf Heß, odd bird and formerly Hitler’s favorite, had a lifetime sentence. So did the economic minister Walther Funk and the head of the navy, Erich Raeder. The wily Albert Speer got twenty years, not for being Hitler’s architect, but for feeding the Third Reich’s armaments factories with slave labor from occupied lands. Baldur von Schirach got 20 years for his role in the Hitler Youth. Konstantin von Neurath got 15, and Karl Dönitz, Reichspresident after Hitler’s death, got 10.

The Allies weren’t taking any chances. The criminals were locked into individual cells in the former fortress prison with guards from all four victorious powers, who rotated the duty every month.

If there was any sign of how dangerous the Allies considered these men, this was it. An entire prison for 7 people in isolation as if they were a cancer – which they were. Still, it’s amazing how much time, effort, resources and money the Allies poured into that prison for so few men for thirty years.

I’m not sure if the special treatment helped these men maintain a certain status that it would’ve been best to wipe out right away via keeping them in a normal prison. In isolation, but a run-of-the-mill one, same as any other max security prisoner would get. It would’ve been nice to see these war criminals cut down to size.

The prison isn’t there anymore, and here’s why. Rudolf Heß, 93 and the last inmate, killed himself in 1987. With that, the prison had fulfilled its purpose. It was torn down so that neo-Nazis who revered Heß couldn’t use it as a shrine.